Tuesday 28 March 2017, is a very special day for Mr Bernie Durkin and the Neighbourhood Watch network. The Australian Prime Minister, Malcolm Turnbull and Minister for Justice, Michael Keenan have met with Bernie at Parliament House in Canberra to discuss his amazing efforts in pedalling across Australia. After question time, the Prime Minister invited Bernie and his bike to the Minister’s courtyard where he and Mr Michael Keenan discussed Bernie’s Ride To Connect.

Bernie spoke of his travels from West to East, of the highs and lows throughout his journey, including extreme heat and the baron bush of the Nullarbor. All of that aside, Bernie had nothing but praise to share with the Prime Minister of the wonderful people who have helped him along the way and (as mentioned previously) how Bernie’s faith in humanity and the Australian people has been restored thanks to the kindness and generosity of strangers.  They also discussed the importance of Neighbourhood Watch being active in every Australian town, city, and region. Without this network, many communities would remain cut off or disconnected from a greater support network.

From Western Australia himself, Mr Keenan understands just how far Bernie has come and how much further he has to go; both geographically and in an effort to connect communities to ensure nationwide safety. Over the next few days, Bernie will finally reach his goal and arrive at Bondi beach. He only has another 250km to go. On Wednesday 29 March Bernie will attend a function hosted by ACT Police and enjoy a rest day in our nation’s capital before commencing his final ride to Sydney. Bernie remains apprehensive of the condition of his bike and the journey coming to a close. But the excitement he shares with those around him and at Neighbourhood Watch Australasia far out-weighs the nervous butterflies.

Bernie will enjoy a rest day in Canberra this week before enduring the final leg of his Ride To Connect into Bondi Beach; the home electorate of Prime Minister Malcolm Turnbull in the division of Wentworth. His final arrival ride into Bondi beach will be 10am on Tuesday 4th April. We encourage everyone in the area to come down and welcome Bernie onto the sand and join in the celebrations, well-deserved by Bernie.

As Bernie continues his ride to Bondi Beach he grows more and more dedicated to connect communities, meet new people, share stories, and celebrate in the Australian spirit. Show Bernie your support no matter where you are in Australia or overseas! Follow along with Bernie via the NHWA Facebook page, Instagram, and Twitter – share stories with #journeywithbernie #ridetoconnect2017 #nhwkeepingyousafe

The Final Hill To Conquer, Connecting Mittagong To Sydney

As night turns to day once more, Bernie sets off on his final leg into Sydney. After visiting relatives in Mittagong, NSW and Bowral, the...

The Neighbourhood Watch Australasia (NHWA) 2019 Malcolm Grant Volunteer of the Year Award was bestowed on a highly involved individual, a man who has been... 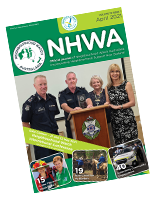